The International Staff of Reef Encounters

Reef Encounters dive staff is has thousands of hours underwater with dives being completed in all areas and types of diving.  We specialize in teaching clients how to dive and to excel at diving.  There is no kneeling or overweighting of students here.  Our staff are the best and we strive for our divers to be the best. 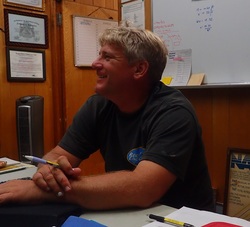 Doug Bennett, NAUI Course Director Trainer, Technical Dive Instructor #17952
Doug came to Okinawa with the military in 1990 and has stayed ever since. With over 13,000 dives throughout Asia, his diving career has brought him from the Great Barrier Reef in Australia to Hainan, China, Pemba island in Tanzania and back to Okinawa. Founding Reef Encounters in 1995 as a small shop to provide quality training for dedicated divers, he has been working full time in the dive industry for more than 20 years.
Doug holds diving certifications from NAUI, IANTD, PSI, and GUE and is certified to repair most brands of SCUBA equipment. Throughout his career Doug has introduced 1000's of divers to the underwater world. He has also worked as the Diving Safety Officer for numerous films and documentaries.  His work includes overseeing the safety of divers for BBC, the History Channel, NHK, Paramount Pictures and many more.  Especially of interest is his participation in many television programs on the underwater structures of Yonaguni. Doug regularly leads our tours to Yonaguni to explore these structures and swim with the schooling hammerhead sharks found there in winter time.  Doug's latest adventure including helping the BBC shoot video of the mysterious underwater circles in Amami Ojima island, and diving with Monty Hall exploring the ruins of Yonaguni.
In his spare time Doug explores the deeper reefs and caves around Okinawa.  Recent explorations have concentrated on finding wrecks around the island.   He got into technical diving back in the mid-90's when independent doubles were the norm, but since has progressed to the RB80 and other re-breathers.  Using his extensive knowledge of Technical diving, Doug can show his students the advantages and disadvantages of numerous set-ups from DIR to NAUI Tech and more.  Doug is our director of Technical training and offers classes from Intro to Tech to Trimix and Technical Wreck Penetration.  Taking training from Doug you are learning from someone who has been there done that - with thousands of dives in his logbook many of them at the technical level his experience sets him apart form the many instructors that just took a quick class to become certified.  His passion for everything underwater shows in all his classes.  Doug is also a very demanding instructor pushing his students to achieve perfection in execution and planning, the things that bring divers home from even the most demanding of dives.
A bit of a warning - Doug is not a morning person and a few years in the USMC has made him a bit rough around the edges but after a cup of coffee or two he is more than willing to help any diver learn the secrets of the underwater world. 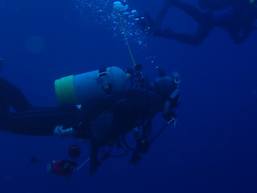 Mei Ki "Maggie" Chan NAUI 57585
Maggie is the newest member of the Reef Encounters instructional team.  Having first come to Okinawa over five years ago for a few fun dives with friends we have now turned her into a full time dive bum.  Recruiting her away from the boring corporate world proved not to be too difficult as long as we promised lots of water time.  Maggie's corporate skills have come into use helping organize a usually slightly cluttered office and streamlined reservations procedures.  Maggie's true talents shine in the water through where her childlike enthusiasm for the new and unique is seen on every dive.  Maggie now has over 1,000 dives in a very impressive dive log with experience in Tanzania, Raj Ampat, Yonaguni, the Keramas, Kume-jima and more Maggie has really filled out her diving resume.  Maggie is fluent in English, Mandarin, Japanese and her native Cantonese.  Maggie is also pursuing her technical diving certifications in her quest to explore more of the underwater world, she is always easy to find underwater as a small skull floats above her head while leading dives.  She also is very possessive of her various Stitch memorabilia- so do not use the Stitch coffee cup or towels.
​ 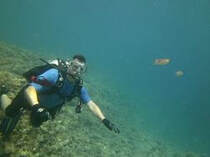 Michael Walls NAUI Instructor 56318
Mike is a Reef Encounters legacy, learning to dive with us in 1997 while he was stationed in Okinawa as a Navy Chief Corpsman.  He came back to Okinawa in 2013, working for us part time and continuing his diving education earning NAUI Instructor and several Technical Diving certifications.  After twenty years of service, he retired from the Navy in early 2016 and has started working full time with the shop. He has extensive experience diving many of the sites around Okinawa and also dove in North Carolina, Italy, Puerto Rico, Yonaguni and the Philippines.  He is an accomplished above water photographer and is starting to dabble in the underwater realm.
​Mike's career in the Navy and Marine Corps has allowed him to travel the world and experience several cultures.  While he is only fluent in English, he has managed to pick up a bit of Spanish, Korean, Japanese and Tagalog.  He is also our resident Medical Advisor, having almost 30 years of Emergency Medicine and Primary Care starting out as a Paramedic/Firefighter in 1987.  He has certified 1000's of students in Cardio Pulmonary Resuscitation(CPR), Emergency First Aid (EFR), Emergency Medical Technician (EMT), Advanced Cardiac Life Support (ACLS), Pediatric Advanced Live Support(PALS), Combat Life Saver (CLS), Tactical Combat Casualty Care (TCCC) and Jungle Survival Medicine. ​ 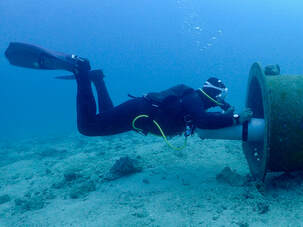 Werther Bentine-Torres (Ben). NAUI Instructor Trainer #58581
Started his diving career in 2004 while he was stationed in Walter Reed Army Medical Center. After completing his NAUI Scuba diver course started working as a training assistant for the following years. After completing his Instructor course with Reef Encounters "Ben" has stayed working with Reef Encounters and has expanded his diving resume to include technical certifications and achieving his Instructor Trainer certification. His diving experience include hundreds of dives in fresh water quarries as well as lakes and springs in Maryland, Pennsylvania, Virginia Florida, and his ocean experience has taken him to Puerto Rico, Philippines and a multitude of sites in Okinawa. Ben has trained hundreds of students at all levels and specialties. As a military instructor he has trained thousands of students in Tactical Combat Casualty Care, Basic Life Support, Advanced Cardiac Life Support, Pediatric Advanced Life Support,  Emergency Medical Technician. Ben is an authorized service technician for Edge, HOG and Dive Rite as well as a PSI/PCI Cylinder Inspector. Ben is currently working closely with Doug and training to achieve his next level of NAUI Leadership certification.