The staff at Reef Encounters is made up of our full time staff at Iwakuni and guest instructors from our Reef Encounters family in Okinawa and around the world! Our staff has expertise in diving, teaching, underwater photography, videography, technical diving, expedition planning and more.  We can help with rounding out your scuba knowledge or planning your exploration of the underwater world! Come by and chat with one of our pros today! 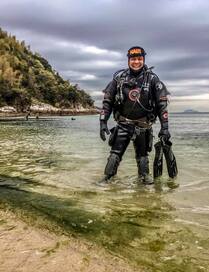 Jeff McBride NAUI Instructor, Professional Photographer
Jeff took his original NAUI Instructor course with Reef Encounters in Okinawa in our original shop in Kin Town.  Jeff continued to work with us until his adventures took him around the world to the middle east, Mexico, Indonesia and more.  Coming back to Japan and looking for a new start right about the time we were looking for a fearless leader for Reef Encounters Iwakuni - Jeff volunteered to lead the charge in Iwakuni and took the reigns to get us started here. As lead instructor for Iwakuni he has gotten the shop up and running and certified the majority of divers in Iwakuni.  Stop in any day and have a chat with Jeff about designing a training plan or a great diving adventure. 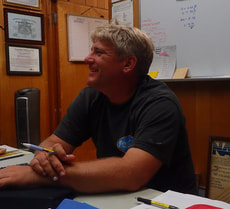 Doug Bennett, NAUI Course Director Trainer, Technical Dive Instructor #17952
Doug came to Okinawa with the military in 1990 and has stayed ever since. With over 13,000 dives throughout Asia, his diving career has brought him from the Great Barrier Reef in Australia to Hainan, China, Pemba island in Tanzania and back to Okinawa. Founding Reef Encounters in 1995 as a small shop to provide quality training for dedicated divers, he has been working full time in the dive industry for more than 20 years. As the full time training director and owner of Reef Encounters International Doug spends considerable time at Iwakuni helping out teaching and getting the shop set up and functioning fully.
Doug holds diving certifications from NAUI, IANTD, PSI, and GUE and is certified to repair most brands of SCUBA equipment. Throughout his career Doug has introduced 1000's of divers to the underwater world. He has also worked as the Diving Safety Officer for numerous films and documentaries.  His work includes overseeing the safety of divers for BBC, the History Channel, NHK, Paramount Pictures and many more.  Especially of interest is his participation in many television programs on the underwater structures of Yonaguni. Doug regularly leads our tours to Yonaguni to explore these structures and swim with the schooling hammerhead sharks found there in winter time.  Doug's latest adventure including helping the BBC shoot video of the mysterious underwater circles in Amami Ojima island, diving with Monty Hall exploring the ruins of Yonaguni and assisting Discovery channel to safely dive with sharks in various sites around Japan.
In his spare time Doug explores the deeper reefs and caves around Okinawa.  Recent explorations have concentrated on finding wrecks around the island.   He got into technical diving back in the mid-90's when independent doubles were the norm, but since has progressed to the RB80 and other re-breathers.  Using his extensive knowledge of Technical diving, Doug can show his students the advantages and disadvantages of numerous set-ups from DIR to NAUI Tech and more.  Doug is our director of Technical training and offers classes from Intro to Tech to Trimix and Technical Wreck Penetration.  Taking training from Doug you are learning from someone who has been there done that - with thousands of dives in his logbook many of them at the technical level his experience sets him apart form the many instructors that just took a quick class to become certified.  His passion for everything underwater shows in all his classes.  Doug is also a very demanding instructor pushing his students to achieve perfection in execution and planning, the things that bring divers home from even the most demanding of dives.
A bit of a warning - Doug is not a morning person and a few years in the USMC has made him a bit rough around the edges but after a cup of coffee or two he is more than willing to help any diver learn the secrets of the underwater world. 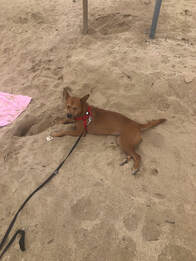 DECO
Shortly after Reef Encounters Iwakuni opened we found the need for a person to fill the need of gear watch, beach standby and all around helper.  Deco happy signed up and joined the team and accompanies every dive trip to ensure there is no buried treasures or dangerous items at the dive sites.  She oversees and screens all visitors to the shop to ensure that only the most discerning of clients train with us.  She is also in charge of physical training for the rest of the crew leading morning hikes in the mountains and ensure all birds are chased off and kept away from the dive gear.  Need a partner for a run on the seawall she is always up for a good run also.  When you come by the shop make sure to say hi to our most valuable member of staff.
Proudly powered by Weebly